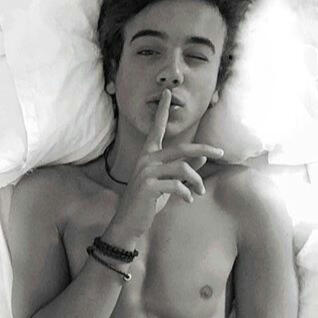 Appearance: James has rather kinky dark blonde hair. He usually wears it short, but sometimes a little longer. His eyes are almond-shaped, muddy green with brown streaks. He has a rounded upturned nose, slightly tanned skin, and thick lips. He is thin, bony build, strong and a little muscular.
Personality: He is usually intelligent and rational, but he can be intuitive and improvised without problems when the situation demands it. He's comical, cunning, sarcastic, and a bit sadistic at times. He has the ability to know when someone is feeling down, but he doesn't quite know how to relate to people or how to comfort them. He always goes out of his way to try to make the other person feel better, but it doesn't always show. He hates when people insult someone he loves, but he tries to stay calm when that happens, even though he doesn't always succeed. His gaze always has a mischievous glow. He is daring and ambicious.
Boggart: His mother saying that she would like to have abandoned him too
Patronus: American black bear

Academics: Excellent on Potions and DADA. He likes Charms, Arithmancy, and Astronomy. He hates Ancient Runes with all his soul, he also doesn't like Transfiguration or History of Magic. He gets along well with Care of Magical Creatures and Herbology.
Powers / Abilities: Great power of concentration - Excellent duelist - Plays guitar - Good reflexes - Strong - Smart

Backstory: James was born in Minnesota, United States. He lived with his mother and his father, both of them where part of the Sacred 28. Jim greatly admired his father, because he (being a magizoologist) had traveled almost all over the world to study animals. Jonathan always told his son stories about the species he had seen, and which he had not yet seen, like the American black bear. The two of them used to be very close. But when James was six years old, his father inexplicably left, according to his mother, "to study American black bears." Jem, of course, was too old to believe such nonsense, and that's why he hates his father since then. After Jon leaved, Amelie moved to London, and a year later she married Robert. Soon they both had Lis. James has always loved her, because for him she has always been her true sister. He is very protective with her, but also very funny. He is always there to make her laugh when she feels down, or to tell her tales, or invent new games.